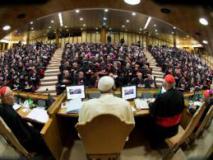 The third stage of a synod is to listen to the pope, the bishop of Rome, called to make pronouncements “not based on his personal convictions, but as the supreme witness of the faith of the entire church,” he said. The fact that the synod is not a decision-making body and acts only “with and under” the pope, he said, “is not a limitation on its freedom, but a guarantee of unity.”