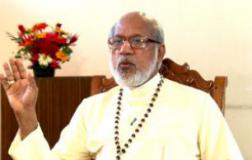 Mississauga: The major archbishop of the Indian-based Syro-Malabar Catholic Church said he believes his church can teach the Synod of Bishops about parishes centered on families.
Cardinal George Alencherry said Syro-Malabar parishes are divided into family groupings or units of no more than 40 people. Each group of families meets at least once a month for an evening spent studying essential questions of faith and speaking with each other about family challenges. Twice a year, all of the family groups come together for a larger catechetical event.“So there is a sharing,” Cardinal Alencherry told The Catholic Register, Canadian Catholic weekly. “And then there is a sharing of all these family units together at least two times a year. That kind of uniting together of families is a great help in our church.”The cardinal said he did not expect that Latin-rite parishes would begin to imitate the organization of Syro-Malabar parishes, but he said he believes Western Catholics could learn from the close bond between parishes and families in his rite.“I will say that the Syro-Malabar church can play a great role in this task of evangelizing by the universal church. It’s a kind of sharing of one’s own experience,” the cardinal said. “There are many elements that the Syro-Malabar church can also take from the Latin church.”The worldwide Synod of Bishops on the family meets at the Vatican Oct. 4-25. The synod, which will include hundreds of bishops, priests and laypeople, will follow up on the work of last year’s smaller extraordinary synod, which examined the challenges facing today’s families.Cardinal Alencherry said “the most important thing is to have the accompaniment of the family by the church … which we forgot to do to some extent in the past. I mean, especially in the countries of the West.”Rather than a forced or artificial process, families are more likely to be evangelized by closer bonds within and among families “creating a community of osmosis,” said Alencherry.While the cardinal expects local churches will be left free to find diverse solutions to the family challenges in their own region and culture, he said such diversity cannot threaten the unity of the Catholic Church.“It will be a diversity that can be very much reconciled on the basis of our faith and our witness of charity — faith working through charity and mercy,” the cardinal said, noting Pope Francis’ constant call to mercy.

“This introduction of the roles of mercy to the normal functioning of the church will give an added impetus to the families in the future church,” he said.